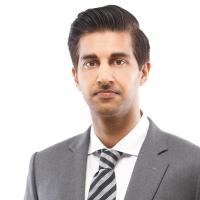 Pavan Jawanda received his B.B.A. from Simon Fraser University in 2003 and his LL.B. from the University of British Columbia in 2008. As a Partner at McCarthy Tétrault LLP (Gold Affiliate of the Centre), his practice is primarily focused on advising public and private companies and private equity firms from a range of industries on domestic and international mergers and acquisitions, capital markets, corporate finance, venture capital, and other corporate and commercial transactions. Prior to joining McCarthy Tétrault, Pavan was a corporate lawyer with Davis Polk & Wardwell LLP where he was based in its New York office from 2008 to 2012 and in its Hong Kong office from 2012 to 2014. He is also a Certified Public Accountant and was previously an auditor with KPMG LLP. Next semester, Mr. Jawanda will teach Topics in Corporate Law: Financial Accounting in Legal Practice at the Allard School of Law.

What inspired you to go to law school?
I can’t say that I was really exposed to lawyers much while growing up – my parents were immigrants from India and I was the first in my extended family to attend law school (although there have been others after me). My father, however, had a degree in political science with a minor in economics – and he really made me appreciate the impact that law, politics and economics have on the fabric of society. I still remember the stories of the challenges he and my mother faced when they came to Canada in the early ‘70s, as well as being inspired by the very proud memories they have from when the Charter of Rights and Freedoms was enacted.

While at SFU for my undergraduate degree, in addition to taking business, finance and math courses for my business degree, I tried to take elective courses from a variety of departments and faculties. Some of my favourite courses were in political science, commercial and criminal law and philosophy (particularly critical thinking, logic and reasoning, which I later discovered were great foundations for law school). All of these reinforced my interest in law school.

It’s funny because I still recall taking one of those career aptitude tests back in high school, and the computer suggested that I become a lawyer. Like any teenager, I was dismissive of its predictive value at the time but here I am.

What led you to pursue a career specifically in corporate/commercial law?
Since my later years in high school, I’ve had an interest in business strategy, finance and economics. I graduated from high school around the time of the dot-com bust. While I had no real appreciation for the significance of the events going on around me during that time, I still remember being riveted by some of the coverage in the newspapers and on the business television shows. Out of curiosity, I started studying tech companies once I got to university to learn about the business fundamentals that differentiated the stronger and more resilient companies from the companies that imploded. After graduating from SFU’s business school, I went on to work with a big four accounting firm and received my CPA designation. So I think my background and interest in business before law school certainly lent itself well to a career in corporate and commercial law.

However, as I was going through my first year in law school, I was still quite open-minded about what I wanted to eventually do – so I explored and I experimented during law school. When I was a summer associate at Davis Polk & Wardwell in New York, I was somewhat of a generalist. However, when I joined full-time as an associate in 2008, I had to choose between corporate and litigation. I chose corporate and then rotated through a few of our groups, including M&A, capital markets and credit (bank finance). Looking back, it was a great decision – I genuinely enjoy what I do as well as the breadth and diversity of my corporate practice.

How has the time you spent practicing in New York and Hong Kong influenced your current practice?
It has influenced my current practice considerably. Much of my work while at Davis Polk in New York and in Hong Kong was cross-border or international in nature. I learned from and was mentored by a number of exemplary lawyers in their fields, such as Richard Truesdell, Michael Kaplan, Deanna Kirkpatrick and the late Kirtee Kapoor. When I decided to move back to Vancouver in early 2014, it was a difficult decision for me, both personally and professionally – it was the firm where I had spent my formative years as a lawyer and I held it (and still hold it) in the highest regard. But Vancouver had tremendous hometown appeal. So when I was making the move back, I was looking for a firm at which I could continue to maintain a robust transactional and cross-border practice. I was fortunate to have landed at McCarthy Tétrault, where I’ve continued to learn from some of the best in their fields, including Vancouver corporate legal icons like Cam Belsher, Rich Balfour and Linda Brown. It has been a great platform to continue building on the type of work I was previously doing and also to branch out to other areas. Having that previous experience in the U.S. and in Asia has been helpful in allowing me to navigate cross-border matters for our clients, many of which are doing interesting things abroad – perhaps even more importantly, those past experiences have helped me appreciate market and cultural differences (in addition to legal differences) across borders.

What are you most looking forward to about teaching Topics in Corporate Law: Financial Accounting in Legal Practice?
I am very much looking forward to interacting with the students. I have taught before and have always enjoyed passing along what I have learned through my own studies and experiences to students in an accessible and interactive way (as well as learning from them). I also think this is an important class and am looking forward to building on it. Much of what lawyers need to know in the areas of finance and accounting can certainly be self-taught, picked up on the job or learned through CPD courses. However, having some basic building blocks from a more structured course in law school can be helpful, particularly for students who didn’t take any classes in finance or accounting during their undergraduate programs. The reality is that finance and accounting are pervasive in what many lawyers do, whether it’s M&A, capital markets, real estate, banking, commercial litigation or family law. You quickly realize that it’s a universal language of business. I have taught similar classes for lawyers at McCarthy and Davis Polk, as well as for the Canadian Bar Association, and the feedback has usually been that the subject matter helps fill a gap for some lawyers.

What advice would you give to students from the Allard School of Law entering the legal profession?
Be patient and be curious. It takes time to develop interests. It is difficult to come out of your first or second year of law school, having done torts and constitutional law and say (with any type of conviction) that you want to work in an area like derivatives, M&A, project finance or even litigation. I’ve seen many people adamant about doing something like M&A change directions and do something quite different like employment law (and vice versa). Things change, people change, interests change. So take the time to try new things. Work with many different lawyers if you have that opportunity; work on matters that are outside your comfort zone or core interests. Not only might you surprise yourself but it will also make you a more well-rounded lawyer.