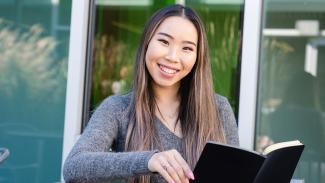 The Law Society of British Columbia has announced its Gold Medal winners for 2022.

Allard Law graduate Kelsey Jade Wong has been recognized by the Law Society of BC for achieving the highest cumulative grade point average over the course of her three-year degree. Every year, the Law Society awards a gold medal to one student at each of the law faculties in the province.

Kelsey explains that while she’s honoured to be recognized for her hard work, the best part of law school was meeting so many remarkable people over the course of her degree. “It's the memories I have with all of these people that will stay with me after I leave law school, not the notes or the grades,” she adds.

We spoke with Kelsey about why she chose to study law and what she’s planning next.

What made you decide to pursue a law degree?

A law degree was initially appealing to me because it seemed like it could be put to use in so many different industries, which makes it a very dynamic profession. You could be in-house counsel for a luxury fashion brand, a lawyer specializing in forestry law or a human rights lawyer — the possibilities really seemed endless!

What kept me interested in law school was the litigation side (sorry solicitors!) and how there are constantly new fact scenarios being presented or questions of law that are being asked because there is no clear answer. Seeing how lawyers craft various persuasive arguments with the help of many years of prior case law is a fascinating process to me.

You had the top GPA at Allard Law over three years. What’s your secret?

If I knew what the secret was then I'd be shouting it from the rooftops! I was completely shocked when Dean Pindell called to tell me that I had won this year's gold medal, and I still think that they must've miscalculated somehow... On a more serious note, I know there's no way that I could have done this without an incredible support system. From my fiancé and my family, to the friends I made along the way at Allard Law, to the friends who've been there since day one — having a support system to cheer me on along the way made all of this possible. It was a group effort!

Outside of getting top marks, you were the Director of Finance for the Law Student Society, an Allard Law Ambassador, and a research assistant. How did you balance law school with everything else that you had going on?

I think that staying busy was actually what helped me balance the demands of law school! Having so many extracurriculars going on as well as part-time jobs meant that any time that I had set aside for studying/note-taking actually had to be used for that purpose or else there'd be no other time to do it. All of these things were a nice distraction from the constant readings that law school throws at you.

Also, being a research assistant for Professor Isabel Grant was undoubtedly one of the highlights of my time at Allard and it never felt like “work”! I learnt so much from Professor Grant and she was incredibly generous with her time and advice.

What's next after law school?

After law school, I'll be clerking at the British Columbia Court of Appeal for a year starting in September of 2022. Following my clerkship at the BCCA, I was fortunate enough to be selected as a clerk for Justice Sheilah Martin at the Supreme Court of Canada in 2023. I'm super excited for both clerkships — I'm looking forward to being able to witness displays of excellent advocacy skills and seeing the thought process that the courts use when coming to a decision.

What advice do you have for new law students who are starting in September?

Stay true to yourself! I think that there's always been a lot of stereotypes about what a typical "law student" should look like or how they should act, but I don't think that anyone should sacrifice who they really are because they think that they have to try to fit into those stereotypes. Be your most genuine self and the world will be better off for it.