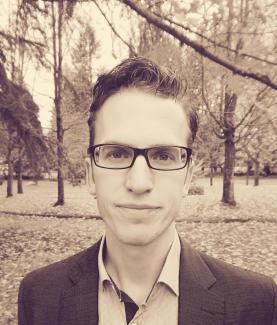 Stephen Pederson is a third year JD student at the Allard School of Law. Mr. Pedersen earned a Master’s degree in Public Administration from Western University and worked as an economist for Statistics Canada prior to attending law school. He is currently a Legal Researcher at Blockchain@UBC, a Student Legal Researcher at Parr Business Law, and President of the UBC Smart Contractors.

What inspired you to pursue a law degree?
Before law school, I was working at Statistics Canada in Ottawa and while some aspects were fantastic, it was also not the right fit for me. One day, while bemoaning my situation to a very smart woman, who I have the good fortune of being married to, she suggested that I write the LSAT and apply to law school. So I did. Law school was something I had thought about for a long time but I needed someone else to push me. I am grateful that I took the plunge. Law school opened some fantastic doors that I would not have been able to navigate on my own.

What interests you most about distributed ledgers, cryptocurrencies, and smart contracts?
The potential to transform existing structures is exciting to me. I still remember the moment I decided to dive into this area. I was driving home from work while listening to a podcast with Nick Szabo and a few other crypto pioneers. It blew my mind that it was not about bitcoin or cryptocurrency. It was about the power of leveraging trust through distributed ledgers and using smart contracts to make exciting things happen. For example, the microgrid project in Brooklyn will let individuals sell power to their neighbours if they happen to live on the sunny side of the street and have a few kilowatts to spare. Augur is a prediction market that will let you take a position on just about anything. When I started looking at all this stuff I thought, “this is it.” Law school helped me see just how disruptive these advances were going to be. It was a natural fit.

Can you tell us a bit about UBC Smart Contractors?
The idea for the UBC Smart Contractors came about while I was sitting down with my computer science friends and trying to wrap my head around distributed ledgers and how to read smart contract code. I had been trying to work through it alone and I quickly realized that it is so much better with a community. I knew I had friends at the law school who would be interested, so that is how the group started.

The Centre for Business Law, Blockchain@UBC, and the Vanbex Group co-hosted an event in October 2017 entitled ICOs and Blockchain, the Swiss Way- could you tell us a bit about this event?
Vanbex is a local company that recently launched an initial token offering. They had a Swiss firm, MME, help them with it. MME are distributed ledger experts and the Ethereum founders hired the firm when they launched ether. Two of MME’s lawyers were in town and Vanbex kindly offered to host a lunch featuring Thomas Linder, a Tax Partner and Certified Tax Specialist, who spoke about Switzerland’s approach to the regulation of initial coin offerings. The event was great because it brought together lawyers, academics, and people from industry who are involved or want to be involved in this area. Having all of these individuals in the same room was fantastic. We will soon announce some blockchain events for students which are a result of connections that were made at this event.