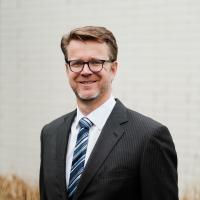 What does it mean to lead ethically decent lives in a world that is simultaneously highly interconnected and terribly violent?