Bordering the Pandemic: COVID-19 and Immigration Law in Canada

Canada’s response to the COVID-19 pandemic started by controlling and then closing Canada’s national borders. From a public health perspective, borders are convenient boundaries to contain the transmission of a virus by curtailing the movement of people, through whom it is spread. Questions of belonging are not necessarily part of the public health calculus, which is concerned simply with minimizing human contact. But because borders are also boundaries used to police who belongs inside the quarantined state and who does not, the rules at the border involve translating public health measures into social distinctions of who belongs where, and why. Immigration law, the primary instrument used to regulate national borders, typically divides potential immigrants into those who are desirable for selection, on the basis of skills, talent or kinship, and those who are excluded from selection, such as on the basis of criminality or for health reasons. Canada’s legal response to the pandemic has now reached well beyond immigration law, but its origins in immigration law shed light on the multivalent nature of borders in pandemic control.

The public health focus on the border as a physical boundary obfuscates the social and political dimensions of border controls by neglecting the ways in which the border remains porous to some, based largely on status and ideas of belonging. When the government closed Canadian borders, the measures emphasized the nature of COVID-19 as an external threat, one which could be countered by excluding those who do not belong in Canada, sorted according to the preexisting categories of immigration and citizenship law. These categories required exemptions for permanent residents and citizens, whose threat to public health was neutralized by way of quarantine and isolation.

It is not only who the border is regulating, but how it is being regulated during this pandemic that conceals the socio-political dimensions of the border. In late March, a series of Orders in Council (OiCs), executive instruments passed by the Governor General in Council on the recommendation of government ministers, rolled out every two days as border controls tightened. First, measures were passed to bar foreign nationals from all countries except the US from entering Canada by air. Then, the US-Canada border was closed to all but essential travel. Finally, an order prohibiting all foreign nationals arriving from a country other than the US to Canada was passed. Further OiCs required transportation companies to monitor passengers for COVID symptoms, and established the government’s mandatory isolation and quarantine measures.

The long-term effects of OiC’s

The nature of the legal instruments and interventions at Canada’s national borders risk longer term, and potentially discriminatory, changes to immigration law and policy. OiCs are enforceable immediately, without the debate or public scrutiny that typically accompanies legislative bills and amendments. This makes OiCs well-suited to emergency situations. OiCs permit the government to act quickly; however, they have a blighted immigration history. Early immigration statutes gave the Governor in Council broad authority to issue OiCs to prohibit the entry of various categories of people to Canada. The ‘continuous journey’ requirement, which required immigrants to arrive by continuous journey from their country of birth or citizenship, started as one such OiC. The continuous journey requirement culminated in the 1914 Komagata Maru incident, during which nearly 400 passengers were prohibited from disembarking their ship for two months in the Vancouver port. In the end, the Komagata Maru was denied entry to Canada and forced to return to India, an incident for which Prime Minister Trudeau issued a formal apology in 2016. This example is not unique; historically, OiCs have prefigured legislative amendments.

During a pandemic, speed and agility are the cornerstones of a state’s legal response. Speed and agility are important in a crisis, but legal scholars have taught us to be wary of the ways in which the emergency and the exception can easily become permanent and normalized. Sometimes, they end up foreclosing the role for law altogether. The concerns that flow from a reliance on OiCs to control the border during this crisis are two-fold: the first is that the speed and ease with which these instruments are passed may mean that they will become lasting features of immigration law, absent the kind of legal oversight extended to other legal instruments. The second concern is that the discriminatory nature of these measures—already condoned by immigration law’s framework of belonging— become broader, deeper, and more established.  Because these forms of executive action sidestep public scrutiny and debate while addressing highly charged political issues, their potential to linger in law and policy is high.

Paradoxically, for the limited number of non-residents and non-citizens for whom the border remains porous – temporary foreign workers – effective enforcement of measures to protect this population during the pandemic could be characterized as anything but swift and agile. The continued entry of this population, too, communicates much about the socio-political dimensions of Canada’s borders. The continued exclusion of this population of workers from concepts of ‘belonging’ under Canadian immigration law, entrenched by the temporary nature of their immigration status, highlights deep and historical divisions within Canadian immigration and society.

Canada has relied on temporary foreign workers to take up jobs in low-wage industries such as agriculture and caregiving for many decades now. In the current pandemic context, these migrant workers are assuming heightened risks to travel to Canada for work, often in low-wage and physically demanding jobs. While the federal government has produced quarantine guidelines for employers, numerous concerns have been raised about the ability of public actors to effectively enforce these guidelines, amplified by the identification of COVID-19 cases amongst temporary foreign workers in BC and Alberta. The government allows these workers to enter on an exceptional basis to meet the needs of the national economy, but the heft of the physical border—and their immigration status under it—continue to follow them, absolving the government from effectively implementing stringent public health measures like those in place for citizens and permanent residents. For migrant workers, the physical border remains porous while the socio-political border remains firmly shut.

These are just two examples of the multivalent border in immigration law. There are many more, such as refugee measures (also taken under OiCs) that curtail human rights and demand our scrutiny. As the public health and immigration perspectives on border controls collide, the only beneficiaries seem to be permanent residents and citizens, who receive the benefit of both. 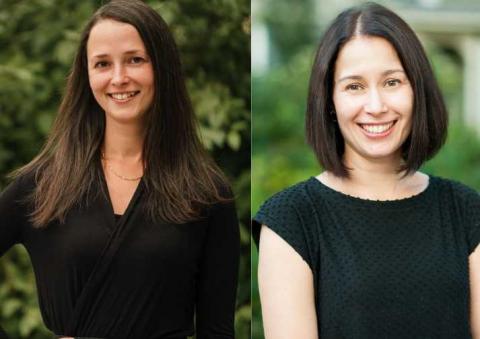 Bethany Hastie is an Assistant Professor at the Peter A. Allard School of Law, University of British Columbia. She initially joined Allard Law as a Lecturer in 2015, after completing her doctorate at McGill University. During her doctoral studies, she held a SSHRC Canada Doctoral Fellowship and an O’Brien Fellowship in Human Rights and Legal Pluralism, and was a member of the Centre for Human Rights and Legal Pluralism and Institute of Comparative Law.

Asha Kaushal is an Assistant Professor at the Allard School of Law. Her research interests lie at the intersection of law and difference, with particular focus on the fields of immigration and citizenship law, legal theory, and constitutional law and theory. She has published in all of these fields. Professor Kaushal teaches in the areas of Constitutional Law, Immigration Law, and Transnational Law and supervises graduate students in subjects related to her research and teaching interests.