The New Politics of Immigration and The End of Settler Societies

As thousands of people continue to flee Syria, the international community struggles to come to a consensus in the debate over immigration policy.

In her new book, The New Politics of Immigration and The End of Settler Societies, Professor Catherine Dauvergne, Dean of the Peter A. Allard School of Law, argues our global understanding of immigration has disappeared, replaced only by hostility and policy paralysis.

How has immigration changed?

Countries are not looking for someone who is poor, persecuted, or struggling, willing to sacrifice for the second generation. We’re trying to attract immigrants who are already successful. That’s one of the real changes in policy over the past two decades. Migration is shifting from a force for alleviating poverty and distributing wealth around the world to a paradigm that exacerbates inequality.

I think we need to be more honest with ourselves about what immigration is and what role it plays in society. The past quarter century of Western government policy that has chased a better economic fit for immigrants has done a horrible disservice to what immigration can actually mean in the prosperous West.

What do you make of Canada’s plan to bring in 25,000 Syrian refugees?

I think Canada should be bringing in a lot more Syrian refugees.

There was a time, right up until the mid-1990s, when Canada had the leading refugee protection system among prosperous Western countries not directly confronted with refugee flows at their borders. We were at the top of the heap. Since that time, Canada has worked to systemically dismantle that protection system.

Late in 2015, Germany was the one country doing innovative work on this issue, and living up to their obligations under international refugee law. They made a commitment to step away from the European legal framework and let people in to make asylum claims. Germany has faced pressures from all quarters, and has backed off some of its more far-reaching promises, but is still generating innovative ideas.

The title of the book references the end of settler societies. What do you mean by that?

The overall concept of immigration was really hammered out at a time when Canada, the United States, Australia, New Zealand, were all being settled, or conquered, by Europeans for the first time. Now that no one is settling anything, we don’t have a comprehensive new story of what immigration is doing for us, even though Western states are still very much involved in attracting certain kinds of immigrants while repelling others. Our way of understanding, and our expectations about “good” immigrants, really don’t fit the contemporary political landscape.

In your book, you suggest international refugee law include a requirement for resettlement, the creation of a global refugee support fund, and eliminating legal barriers. Why aren’t these ideas being put into action?

None of these ideas is earth shatteringly innovative, but they are so out of step with the current political climate. There’s nothing legally that says you can’t let these people die in the ocean. Morally, we’re not going to tolerate that. But refugee law doesn’t require us to do anything for those people. I think these ideas are dormant because states have not been willing to take on those responsibilities. The potential responsibility is enormous and we can’t see the endpoint of obligation.

Right now in refugee law, you’re only responsible for people who arrive in the country. For those who arrive in Canada, we’re legally obligated to make a good faith effort to protect them. But we can do anything we want in the world to prevent them from getting here. Canada already has a fantastic advantage in geopolitical terms because people can’t get here easily or by accident. Geography limits our responsibility enormously. 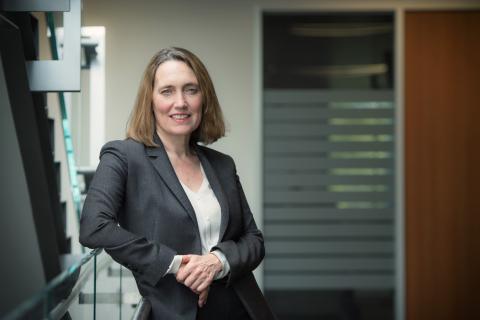 Professor Catherine Dauvergne, Trudeau Fellow and the Dean of the Allard School of Law, works in the areas of immigration and refugee law in Canada and around the world. Her research is grounded in a belief that how we define and police the boundaries of our societies determines the terrain of our political engagements and says much about our national identity.