The genesis of Autonomous Motherhood? can be traced to a 2007 lunchtime discussion between Professor Susan Boyd, Chair in Feminist Legal Studies at the Allard School of Law, and the newly appointed Assistant Professor Fiona Kelly. As faculty affiliates of the law school’s thriving Centre for Feminist Legal Studies (CFLS), both had worked on a range of issues at the intersection of family law and feminist legal scholarship over the years, from lesbian motherhood to the emerging assertion of fathers’ rights, but all concerned with parenting couples. This fruitful collegial lunch, illustrative of the rich scholarly community of the CFLS, revealed a gap in the field of family law research inviting further inquiry: single mothers.

Professor Boyd’s research has long explored how laws on parenthood and parenting disputes actually work and, in particular, how these laws serve to perpetuate problematic assumptions about gender and equality. She has tackled such controversial but important questions as whether parenting laws exhibit bias in favor of mothers or fathers, and whether they adequately accommodate same sex partners. Her work has provided an insightful critique of some of the trends developing in family law over the last three decades, including the tendency to increasingly affirm fathers’ rights in circumstances where a range of woman’s rights might be compromised, including a right to autonomy, maternal rights, and rights to define the kind of family in which they want to raise their children. Published this year, Professor Boyd’s new co-authored book on Autonomous Motherhood? A Socio-legal Study of Choice and Constraint continues to probe fundamental assumptions within the law about the nature of family and of parenting.

A considerable body of scholarly work has addressed the topic of single mothers, but with a particular focus on social systems – issues such as poverty, government policies and the welfare state. While alert to these issues, as family law scholars Professors Boyd and Kelly set out to situate their analysis of single motherhood in terms of family law and laws on parenthood per se. The phenomenon of single mothers by choice offered a perfect area of focus.

Professor Boyd recalls being initially unfamiliar with the term ‘single mothers by choice’. Yet her research revealed early on that the term has been in use at least since the 1980s. Women have been choosing to have children as single parents for a long time, and for different reasons. Professors Boyd and Kelly realized that they needed to expand their focus historically, as earlier stigma about unmarried mothers and illegitimate children formed an essential backdrop to the choices women had made in the past and continued to make in establishing themselves as autonomous mothers.

To deepen the scope of their analysis further, Professor Boyd and Fiona invited two more researchers to the project: Dr. Dorothy Chunn, Professor of Sociology at Simon Fraser University; and Wanda Wiegers, Professor of Law at the University of Saskatchewan. Both brought important perspectives to the project. Professor Chunn is a feminist social historian with a strong interest in law, bringing insight along social and historical dimensions; and Professor Wiegers’ work has examined single mothers and the law from a feminist perspective. With Professor Boyd as principal investigator, the four scholars secured funding from SSHRC to support their research.

One of the unique contributions of Autonomous Motherhood? lies in its use of an extensive series of interviews the authors conducted around the question of whether autonomous motherhood is a more viable proposition in the 21st century than in the decades after WWII. The research revealed that women have actively engaged in this practice from at least the 1960s onwards. (And, perhaps surprisingly, earlier single mothers tended to be more willing to share their experiences.) The interview material also provided a rich record of how women make the decision to parent alone, how children are conceived, and the challenges these women face.

Some women in the earlier decades had been in unstable or short-term heterosexual relationships when they got pregnant. In a few cases, women did not disclose to the man that they were expecting, a scenario raising difficult legal questions – for example, is there a duty to tell the man that he has a biological child and should he have rights on the basis of the genetic tie alone? More broadly, the law posed significant challenges for a number of women, with issues ranging from the right to raise the children alone to challenges with birth registration, crossing borders, obtaining passports.

Historically, women’s autonomy as mothers has been experienced against a backdrop of legislation on illegitimacy, which the book traces going back to the 19th century. Under the English common law, neither parent was recognized as a legal parent to a child born outside of marriage. In such cases, the child was of no one (filius nullius), while the mother was in practice responsible for him or her. For fathers, the designation of responsibility came later, when governments decided that they wanted fathers to share financial responsibility for support – especially if the mother was reliant on government or others. Statutes that allowed the mother or the people who were supporting her to sue the birth father to support the child, always on the condition that paternity could be proven, steadily grew. What emerged from these immediate considerations of financial responsibility was a legal and social construct of men as financial providers and breadwinners, especially in family law.

The abolition of illegitimacy as a legal category occurred unevenly across the country, with mixed results for women’s autonomy as mothers. Law reform in this area was largely done in the name of children’s rights, but there were also considerations of equality at play. At the same time, however, arguments emerged that birth fathers should be given rights, too, and that the law should in fact equalize the rights of birth mothers and birth fathers. As a result, the process abolishing the category of illegitimacy in the law was tied to an elevation of legal recognition for birth fathers, including for claims of custody and guardianship.

The multidimensional analysis of Autonomous Motherhood? is rounded out with a fine-grained examination of the case law, examining in particular earlier judicial decisions that began to recognize paternal rights and further cases involving non-cohabiting unmarried parents. Tracing the similar trajectory as the legislative history on illegitimacy, earlier cases did not give accede much by way of rights to birth fathers. However, by the end of the 20th century and into the 21st century, many judges began to involve fathers in children’s lives – even when a woman has made a choice to have a child on her own, has taken sole responsibility for that child, and is asking for no help from the birth father.

Professor Boyd stresses that one of the key arguments of Autonomous Motherhood? is that, from a feminist perspective, our legal system needs to find some way to acknowledge that for many reasons, some women are choosing to be single mothers. Often this decision is a last resort, because most women prefer to find a partner with whom to have a child; but in the absence of this happening, they may decide to have a child on their own. For the law, difficult questions emerge. On the broadest level, there is a tension between encouraging men to be more involved in children and child care while recognizing and validating alternative choices and family forms.

More specifically, what would a legal affirmation of autonomous motherhood say about the status of birth fathers? British Columbia’s new Family Law Act does not grant the status of ‘legal parent’ to a man who simply donates sperm. Something more has to be shown before a court will recognize him as a legal parent. The question that remains is what that something more actually is. Are there reasons why legal status should be granted to men in cases where women are choosing to conceive and raise children autonomously and where the man may have no intention to participate in the child’s life? Family law is by no means settled on how to answer these complex questions.

Professors Boyd, Chunn, Kelly and Weigers flag these difficult issues in the conclusion to their book and offer some tentative suggestions. Against the background of a rich historical analysis, Autonomous Motherhood? reveals powerfully complex questions that will shape debates about defining legal families and legal parenthood, and the challenges inherent in recognizing women as autonomous beings, well into the future. 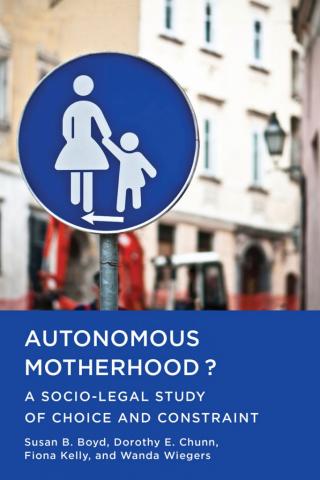 Professor Susan Boyd joined the Allard School of Law in 1992. She taught previously at Carleton University's Department of Law in Ottawa. At UBC, she holds the endowed research Chair in Feminist Legal Studies. She was the founding Director of the Centre for Feminist Legal Studies from 2007 to 2012. She is also a Fellow of the Royal Society of Canada.