What Does the Cullen Commission Mean for Beneficial Ownership Transparency in Canada? 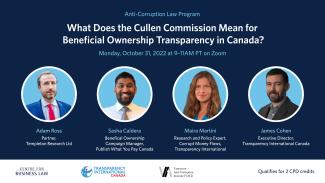 The Anti-Corruption Law Program is pleased to announce a four-part webinar series to explore the key recommendations arising from the Report of the Commission of Inquiry into Money Laundering in British Columbia (Cullen Commission Report). The 1,800-page Cullen Commission Report was released in June 2022, and represents a watershed moment for anti-corruption law reform efforts in Canada.

The Cullen Commission heard from 199 witnesses, received thousands of exhibits plus written submissions, sponsored research, and archived live recordings of oral evidence. This four-part Webinar Series is designed to help participants to distill the key issues raised at the Commission and to evaluate its recommendations so that organizations and individuals can effectively address and combat anti-corruption within their own operations and activities in Canada and abroad. Each webinar panel will feature nationally and internationally-recognized anti-corruption and anti-money laundering experts.

Session 2: What Does the Cullen Commission Mean for Beneficial Ownership Transparency in Canada?

James is an anti-corruption expert with a background in international development and security. Prior to becoming Executive Director of Transparency International Canada, James’ work included program management and design, training, research, and fundraising for organizations including the United States Institute of Peace, the African Centre for Justice and Peace Studies, the Global Organization for Parliamentarians Against Corruption, and the Geneva Centre for the Democratic Control of Armed Forces. James also worked for Transparency International’s Defence and Security Programme from 2011-2013 where he focused on corruption risk to military, police, and peacekeeping, as well as advising governments and civil society including TI chapters. James joined TI Canada in 2016 as Interim-Executive Director, and held the post of Director, Programmes and Engagement before becoming Executive Director. James holds a Masters from the Graduate Institute of International and Development Studies, Geneva and a Bachelor of Social Science in Political Science from the University of Ottawa.

Sasha Caldera is the Beneficial Ownership Transparency campaign manager at Publish What You Pay Canada. Since 2017, Caldera has been managing a national coalition-led advocacy effort for Canada to create a publicly accessible registry of beneficial owners. Caldera prepares technical submissions and leads policy discussions with various government officials in Canada, and manages relationships with federal, provincial, and territorial decision makers. Caldera brings 13 years of NGO experience including co-founding his own non-profit organization and 10 years of advocacy campaign experience. His commentary can be found in The Globe & Mail, the Toronto Star, Global News, iPolitics, the Hill Times, and the CBC. He has also appeared as a witness at the House Commons Standing Committee on Finance. Caldera holds a BA from Simon Fraser University and an MA from Royal Roads University.

Adam is a co-founder and partner of Templeton Research, an investigative research firm. He has over a decade of experience in business intelligence and investigations, and has worked extensively with private sector and government clients to tackle issues related to money laundering and corruption. Adam began his career as an investigative researcher for leading anti-corruption and human rights organizations in the UK and Asia. He is the author of several ground-breaking reports for Transparency International Canada on issues related to opaque ownership and money laundering risk, and is a member of TI Canada’s Beneficial Ownership Working Group.

This webinar series is being presented by the Anti-Corruption Law Program, which is a joint continuing professional educational initiative of the Centre for Business Law at the Peter A. Allard School of Law at the University of British Columbia (UBC), Transparency International - Canada Chapter, and the Vancouver Anti-Corruption Institute at the International Centre for Criminal Law Reform and Criminal Justice Policy, also at UBC. 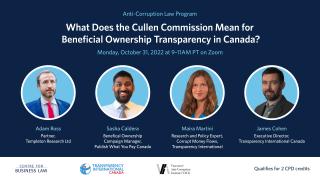