Partnerships in Indigenous Finance: Paths to Sustainable Finance and Protection of Biodiversity

Financing the transition to net-zero carbon emissions requires government to government and government to private sector partnerships. Please join us for an important discussion on Indigenous partnerships for sustainable finance and governance, including successful partnerships in conservation finance; the transition to sustainable energy in action; and a discussion of the recent creation by the Canada Infrastructure Bank of its Indigenous infrastructure Initiative, which is directing $1 billion in investments across five priority sectors. 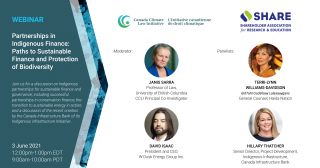