The International Criminal Court: the story of hope against odds

Judge Chile Eboe-Osuji, President of the International Criminal Court, has served as Judge of the ICC since 11 March 2012, and he is the Court’s President and Judge of the Appeals Division since 11 March 2018. Prior to joining the ICC, Judge Eboe-Osuji was the Legal Advisor to the UN High Commissioner for Human Rights, during which time he anchored the High Commissioner's interventions in cases involving human rights questions. In that capacity, he led the writing of amicus curiae submissions to the European Court of Human Rights and the United States Supreme Court. He served as principal appeals counsel for the Prosecution in the Charles Taylor Case at the Special Court for Sierra Leone, and has held several posts at the International Criminal Tribunal for Rwanda, including Head of Chambers and Lead Prosecution Trial Counsel.

He was called to the Bar in Nigeria, Ontario and British Columbia; and practiced as a barrister in Nigeria and Canada. Judge Eboe-Osuji taught international criminal law as adjunct professor at the Faculty of Law of the University of Ottawa, Canada, and has an extensive record of legal scholarship and publications, including the books titled International Law and Sexual Violence in Armed Conflicts, and Protecting Humanity (ed). He is the editor-in-chief of the Nigerian Yearbook of International Law. He served as legal expert to Nigeria's delegation to the ICC-ASP Special Working Group on the Definition of the Crime of Aggression. 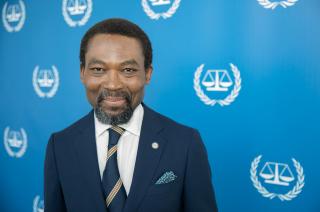