Can Canada and China still learn from each other? Balancing Research Partnerships, National Security and Economic Competitiveness 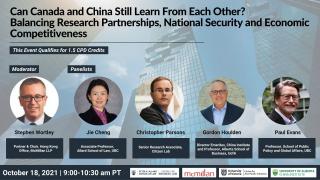 The future of the relationship between Canada and China is back in the news — but what does that mean for Canadian researchers who have been warned about too-close ties to Beijing?

The release of Michael Kovrig and Michael Spavor and the resolution of the U.S.-based case against Huawei executive Meng Wanzhou has resolved one tension point between Canada and the emerging super power.

In this webinar, we will explore how international research partnerships have become tangled in the complex web of national security and economic competitiveness. We will ask Canadian academics who have done work with China and who those who understand the Canada-China relationship to share their insights and thoughts on what comes next when academic and geopolitics collide. The session will operate under Chatham House Rules to allow for frank, open discussion.

The panel will explore the ramifications of an outreach program launched by the Canadian Security Intelligence Service in April 2020.

At the time, CSIS warned Canadian universities and researchers to be on alert for international espionage and foreign interference targeting their research and data— from partnerships that could compromise intellectual property to the possible presence of foreign agents in labs. CSIS then identified research areas that may be considered sensitive or dual-use, which included quantum computing, advanced electronics and engineering, vaccines, chemistry and artificial intelligence.

In May 2021, Alberta ordered its four major universities to suspend the pursuit of any new or renewed partnerships linked to China. It also asked them to undertake a thorough review of their institutions’ relationships with any potentially linked entities.

The actions by CSIS and Canadian governments have raised important questions about academic freedom, openness and competitiveness. They have also prompted examination of the effects on the private sector, which relies on public-private collaboration to fuel innovation and growth.

Supporters of academic freedom are worrying about the effect of undermining legitimate partnerships as well as an open and collaborative research environment. However, there are growing concerns and calls for developing a new strategy for securing national research.

This event qualifies for 1.5 CPD credits.