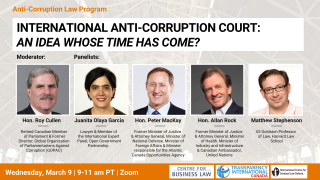 Senior government officials in various countries have long been embezzling public money and other assets with impunity. Known as grand corruption, this activity makes petty bribery look like child’s play, thanks to the millions―and sometimes billions―of dollars stolen by these kleptocrats. Local prosecutors and judges are often unwilling or unable to lay charges or obtain convictions as they have been captured by the executive branch of their government, or because they are corrupt themselves. Sadly, few countries are immune to this scourge

While numerous initiatives have been undertaken over the years to root out grand corruption, there is scant evidence that such crimes have in fact been curtailed. Instead, the opposite is more likely the case. Many commentators argue convincingly that grand corruption is actually on the rise, as attempts to stop the laundering of corrupt money and recover and repatriate stolen assets have not delivered the desired results.

Has the time come then, to approach the problem in a different way? Should Canada take a leadership role in creating a law enforcement institution that can effectively investigate, prosecute, convict, and sanction corrupt senior government officials?

In the mid-1990s the government of Canada led the development and implementation of a successful initiative to eliminate worldwide anti-personnel land mines, an initiative that resulted in the Ottawa Convention or Mine Ban Treaty. Can this historic example of successful Canadian leadership to create global support for the Ottawa Convention be replicated to combat kleptocracy through the creation of an International Anti-Corruption Court? Could such an institution help reduce grand corruption, a crime which blocks sustainable development and deprives millions of citizens worldwide the opportunity to move out of poverty.

In Canada, both major political parties have publicly stated their support to move this policy agenda forward. In December 2021, Canada’s Minister of Foreign Affairs, Ms. Melanie Joly, was mandated by the Prime Minister Trudeau to work “with international partners to help establish an International Anti-Corruption Court, to prevent corrupt officials and authoritarian governments from impeding development that should benefit their citizens.”

Should these clear signals be seized upon to find solutions to the vexing problem of grand corruption? We invite you to join our distinguished panel of internationally-recognized anti-corruption experts as they engage in a robust roundtable discussion on this topic, and field questions from the audience.

This webinar is part of the Anti-Corruption Law Program which is a joint continuing professional educational initiative of the Centre for Business Law, Peter A. Allard School of Law at UBC, Transparency International, Canada Chapter, and the Vancouver Anti-Corruption Institute at the International Centre for Criminal Law Reform and Criminal Justice Policy.

This event qualifies for 2 CPD credits.