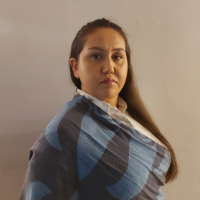 The Cedar stands strong behind her as the guitar and sax drift gently around her. Terri-Lynn Williams-Davidson sings soothingly to those cedars as a sign of respect and gratitude. The song is Cedar Sister, sung in Haida words about what the cedar gives us. She describes the shelter it provides, the lessons it gives, and how it lives in harmony with all beings like the bear and salmon. Beyond being beautiful and artistic, the song has significance in the Canadian legal landscape and specifically for the Haida people and their awakening indigenous law.

Williams-Davidson is the Indigenous renaissance woman of the 21st century. She is a singer, songwriter, activist, author, lawyer, and founding partner of White Raven Law. Born in Skidgate in Haida Gwaii to the Raven clan, her passions in culture and law began in her youth. Williams-Davidson began singing in her community and founded a children’s dance group. “I learned that songs come from the land, and are a reflection of the land,” she says. In her youth she traveled to the United States and was inspired by elders fighting against a uranium mine to protect the environment. This was the catalyst for her journey to law.

The world must have been daunting for Williams Davidson. Her academic career started with a degree in computer sciences from the University of British Columbia. From there she got her JD at Allard Law. She entered these fields where there was a clear imbalance in the representation of women and Indigenous people.

In representing her community, she demonstrated the importance of Indigenous perspectives and law in aboriginal rights cases. In her oral argument before the Supreme Court of Canada, Williams-Davidson explained the intricate relationship Haida people have with the Cedar trees: “This inextricable relationship between Haida culture and cedar is embodied in the Haida belief that the cedar tree is a ‘Sister’, providing for and sustaining our existence.” She went on to say, “The rights at issue in this case are Aboriginal title and the right to choose how the lands and forests are used, and the right to harvest old-growth forests and cedar, which include the right to leave the cedar standing.” Without her brilliant and passionate account of what was at stake for the Haida people, the court may not have been convinced that the potential adverse impacts would have triggered the Crown’s duty to consult.

Realizing indigenous law in Canadian law can be an uphill battle. Canadian law has traditionally been used as a tool of oppression against Indigenous people. Terri-Lynn Williams-Davidson sees it as a tool to balance living with the land, Crown title, and Aboriginal title. Williams-Davidson sees protecting the people’s connection and relationship to the land as part of protecting the land itself. Even though Canadian law has oppressed Haida law and culture, she sees the potential for reconciliation and healing for the people of Haida Gwaii.

In 2017 she published her book Out of Concealment: Female Supernatural Beings of Haida Gwaii. The book is a collection of stories of entities that inhabited the Earth before Haida people. The book goes through origin stories, and beings of the sky, land, and water. The characters create a landscape on which to situate the Haida people’s view of the world and ground us in the Haida ancestral experience. It is a setting that gives us a glimpse into the interconnectedness of the Haida people, animals, the land and sea. The stories are a representation of Haida law. They embody values, direction for good living, and a foundation for Haida governance. The final chapter of the book uses stories of supernatural beings and grows them to fit our contemporary contexts. It brings to life the real environmental issues being faced by the Haida today and gives us some direction on how they should act going forward.

Terri-Lynn Williams-Davidson’s work is the embodiment of the use of indigenous law into Canadian pluralism. She demonstrates to us that an ideal way to protect the environment is to centre indigenous perspectives on the land. She is an icon for aspiring indigenous lawyers who feel adrift in a sea of colonial worldviews and laws. Indigenous laws need indigenous people, and we should all be grateful that Terri-Lynn Williams-Davidson embodies this principle. No other could do it more artistically, relatably and beautifully. You are so beautiful, my cedar sister.

E. Condesa Strain (she/her) is xʷməθkʷəy̓əm (Musqueam), Syilx (Okanagan) and Secewpemc (Shuswap). She has two children, a son named Quintasket (“touches the sky”) and a daughter named Segwses (“Sunshine”). She finished a Bachelor of Arts Degree in Criminology with Honours in 2018 and started at the University of British Columbia at the Peter A. Allard School of Law in the same year. She enjoys spending time in nature, with her children, and playing rugby.